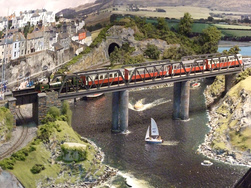 The Clydach Railway was my first exhibition layout. I have modelled a preserved narrow gauge line in a modern setting.

The layout represents a fictional preserved tourist railway situated somewhere on the coast of north-west Wales. I imagined that the original line was built to carry slate from quarries in the mountains to the port of Aberclydach. After commercial operation ceased, the Clydach Railway Preservation Society took over the ownership of the railway in 1954 and re-opened it. The line later expanded onto the trackbed and bridges of a standard gauge branch line which had closed in the 60's. 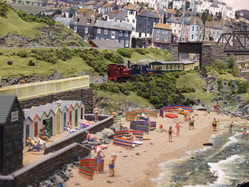 The new section was opened in 1979 and since then passenger numbers have grown, new stock has been built and now the Clydach Railway (Rheilffordd Clydach) is undoubtedly one of the “Great Little Trains of Wales”. The layout was featured in Railway Modeller magazine in Nov.2010 and also in the May and June 2012 issues. A wide variety of stock is run on the layout representing a variety of narrow gauge lines. Locomotives include a number of Garratt articulated designs. There are two stations on different levels with inclines and an impressive girder bridge across a river estuary. The layout also features a colourful beach scene and many other scenic details.

Clydach was featured in Railway Modeller in November 2010, and May and June 2012.

Although I am now based in Somerset, friends from Oxfordshire regularly help me operate the layout at exhibitions.

Click to go to the photo album for The Clydach Railway.

Click to see a video of The Clydach Railway.

If you want to know what it would be like to experience a ride on The Clydach Railway in one of the company's diesel locos, click here

The Clydach Railway is scheduled to appear at the following exhibitions:

If you are interested in having The Clydach Railway at your exhibition then here is some useful information for exhibition managers. To contact me please use the contact box at the top of the screen.