Woodbury Wharf started life as a small triangular layout which was built as an entry in the Dave Brewer Challenge at Expo Narrow Gauge at Swanley, Kent, in October 2013. The layout was originally called Windrush Wharf after the River Windrush in Oxfordshire, where my wife and I used to live. The challenge was to create a working narrow gauge layout on a triangular baseboard with sides in the ratio of 30:40:45 and a maximum size of 54cm by 72cm by 81cm. These particular dimensions were chosen because, in 2013, three anniversaries were being celebrated : 30 years of Expo Narrow Gauge, 40 years of Meridian Models and 45 years of the Greenwich and District Narrow Gauge Railway Society. This little layout was also presented at the Oxfordshire Narrow Gauge Modellers’ Open Day in June 2014. 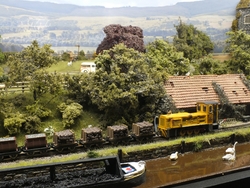 During 2018 the baseboard was extended to include a continuous circuit and a passing loop at the rear. Operation can be set to automatic mode where two trains take it in turns to run across the front of the layout in different directions. Also, LED lighting has been installed and a surrounding frame which includes the layout name has been added.

Click to go to the photo album for Woodbury Wharf.

The Woodbury Wharf is scheduled to appear at the following exhibitions:

If you are interested in having Woodbury Wharf at your exhibition then here is some useful information for exhibition managers. To contact me please use the contact box at the top of the screen.