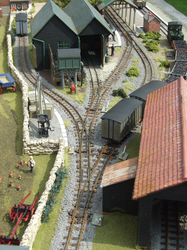 The Wantage Tramway was a standard gauge railway that linked the market town of Wantage to the GWR mainline which was two and a half miles from the town but I have modelled it as though it had been a narrow gauge line.

The tramway had some very unusual locos and rolling stock for a British railway, and the train shed is also pretty unique. Unusually, the ‘small engine shed’ straddled the siding that fed the local gas works. This little layout is my interpretation of what the ‘Upper Yard’ at Mill Street, Wantage, might have looked like, had the tramway been built as a 2ft 3in narrow gauge line.

I do not claim that this is an accurate model of the terminus, but I hope that it does give an impression of the area in the 1920’s. The original tramway closed to passengers in 1925, but goods traffic continued until December 1945. The railway buildings are accurate models of the prototypes, apart from window sizes and styles. Here I have used plastic windows that I happened to have in stock. Some of the other buildings have been scratch built using card and plastic. Use has also been made of models from the Hornby Skaledale and the Bachmann Scenecraft ranges. 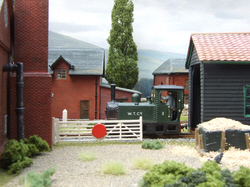 The two main tram locos, the Hughes tram No. 4 and the Matthews tram No. 6, have been built using Worsley Works brass etches. The models run on Kato 9mm gauge chassis. The three tram-cars, numbers 3, 4 and 5, have also been built using Worsley Works brass etches. Each of these also runs on an N-gauge chassis. There are two back-up tram locos which are used at exhibitions. One was built by Paul Windle, and I built the other using a 3D printed body from Chris Ward. Other rolling stock has been constructed from plastic kits of various prototypes from Great Britain and Ireland. Some have been built as the kit manufacturers intended, others have been modified considerably by mixing various kit parts and altering width and length of vehicles. 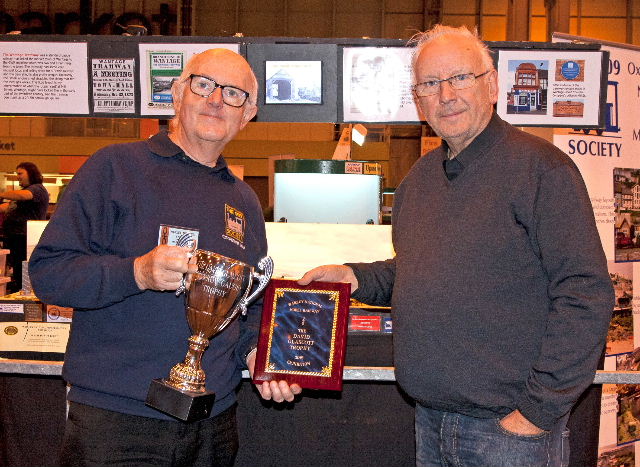 Wantage was awarded the David Glascott Trophy for the ‘Best Narrow Gauge Layout’ at the Warley National Railway Exhibition at the NEC in November 2015.

Wantage was featured in RAILWAY MODELLER in September 2013.

Although I am now based in Somerset, friends from Oxfordshire regularly help me operate the layout at exhibitions.

Click to go to the photo album for The Wantage NG Tramway.

Click to see a video of The Wantage NG Tramway.

The Wantage NG Tramway is scheduled to appear at the following exhibitions:

If you are interested in having The Wantage NG Tramway at your exhibition then here is some useful information for exhibition managers. To contact me please use the contact box at the top of the screen.